Honouring the king of the ancient city of Benin.

The Benin Kingdom was “one of the oldest and most highly developed states in the coastal hinterland of West Africa. It was formed around the 11th century AD” and lasted until it was annexed by the British Empire in 1897.

The Oba and his court

The Oba was the head of the kingdom as both political and spiritual leaders. He led the council of chiefs who made decisions on matters such as war, trade, taxation, and ceremonial events, and while the chiefs might be powerful and influential, the Oba held the overriding authority. The Oba derived his power not just from the social and political world of Benin, but also from the spiritual world through his link to the great god Olokun, ruler of the sea. In its turn, the palace was the spatial centre of the city-state, providing the administrative frameworks for administering the affairs and wealth of its empire and the physical structure on which the symbols of the state and its leader could be displayed. 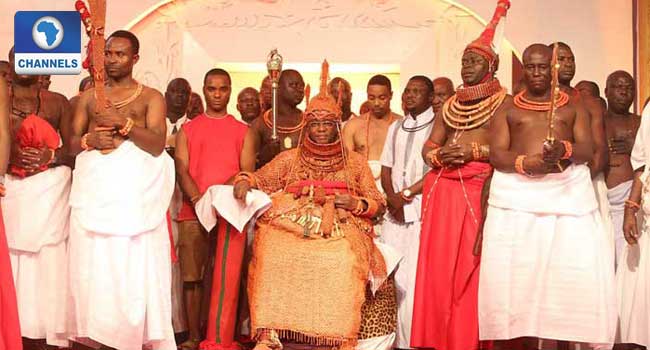 In Benin, the Oba was divine.

The Oba’s divinity and sacredness were the focal points of the kingship. The Oba was shrouded in mystery; he only left his palace on ceremonial occasions. It was previously punishable by death to assert that the Oba performed human acts, such as eating, sleeping, dying, or washing. The Oba was also credited with having magical powers.