and is believed by the tribe to have magic powers to protect the human way of life of the owner and the tribe.

This Guro mask is very unique and has a combination of human and animal traits and imaginary beasts.

Birds of different kinds can often be seen carved into masks such as the horn bill or other large billed birds.

These masks were commonly used during the traditional ceremonies such as funerals, animal sacrifices and weddings,

today the people of Ivory Coast honor their ancestors with traditional dance and the mask represents their loyalty to the past. 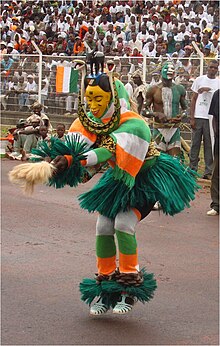