– The stools come in many forms. Carved from single blocks of wood.

The grain of the wood runs horizontally, even across the legs.

Most Nupe are Muslim and their art is therefore abstract,

with only some stylized animals in relief on their doors and some pots.

The stools come in many forms yet are all carved from single blocks of wood.

Amazingly, the grain of the wood runs horizontally, even across the legs.

The Nupe people, (traditionally called the Tapa by the neighbouring Yoruba),

are a Volta-Niger ethnic identity and historic nation native to north central Nigeria,

and are the dominant ethnicity in Niger State, an important minority in Kwara State and present in Kogi State as well.

confederation of towns along the Niger in the 15th century.

people in the southwest led to cross-fertilization of cultural influences through trade and conflicts over the centuries.

There are probably about 4.5 million Nupes, principally in Niger State.

The Nupe language is also spoken in Kwara, Kogi and FCT. They are primarily Muslims,

with a few Christians and followers of African Traditional Religion.

The Nupe people have several local, traditional rulers. The Etsu Nupe (Bida) is not pure Nupe,

His great Grandfather from his father side is Fulani while the family of his mother was complete Nupe.

His Great grandfather from his father side came to rule the Bida in the 1806.

They have no present capital, although they were originally based at Rabah and

only moved to Bida in the nineteenth century. 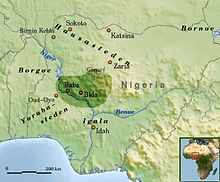 The Nupe people have various traditions.

Much of their culture was diluted by the Usman Dan Fodio jihad of the 19th century,

but they still hold on to some of their culture. Many Nupe people often have scarification

on their faces (similar to an old Yoruba tradition), some to identify their prestige

and the family of which they belong as well as for protection, as well as jewelry adornment.

But these traditions are dying out in certain areas.

Their art is often abstract.

They are well known for their wooden stools with patterns carved onto the surface.