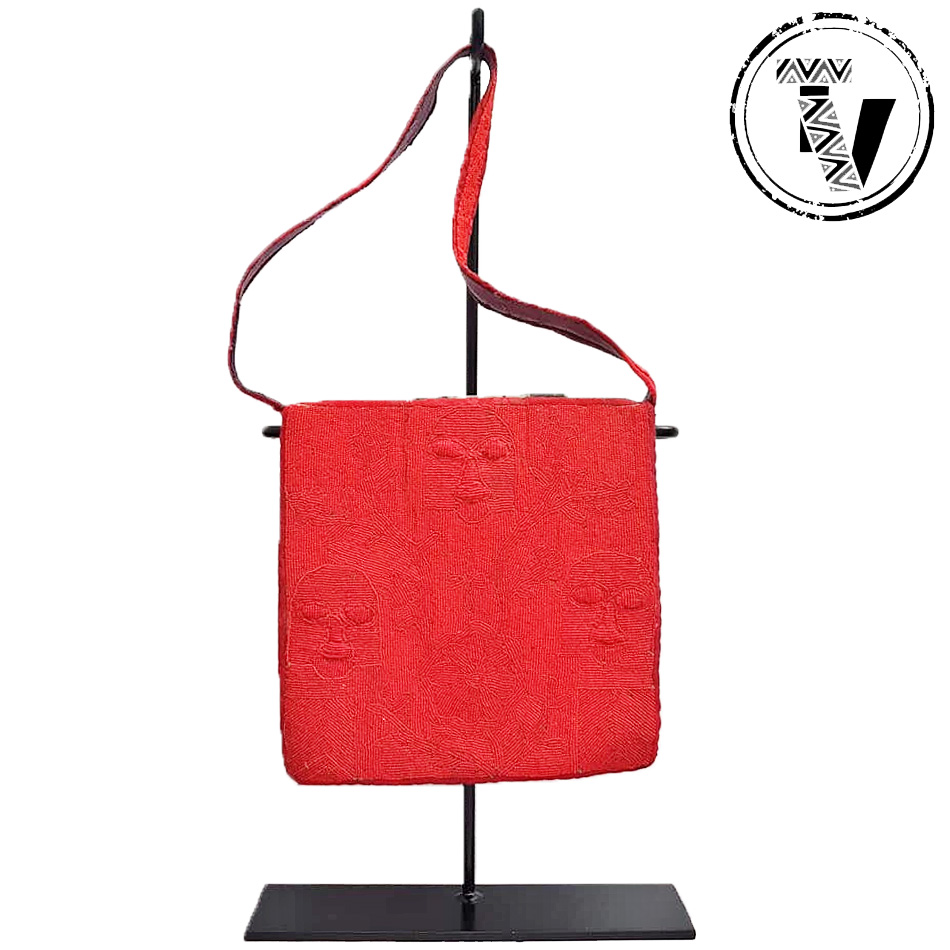 objects by oracles/diviners of the Yoruba tribe, Nigeria.

Used to carry divination objects and tools, the bags are worn in public ceremonies by

Ifa priestesses and used and displayed in their homes.

Beads were signs of wealth and status. The beaded front lifts up to reveal a pouch on the back panel.

The three beaded faces on the bag are Eshu, also spelled Eschu, also called Elegba, trickster god of the Yoruba of Nigeria, an essentially protective, benevolent spirit who serves Ifa, the chief god, as a messenger between heaven and earth. Eshu requires constant appeasement in order to carry out his assigned functions of conveying sacrifices and divining the future. One myth depicts Eshu as tricking Ifa out of the secrets of divination; another, in which Eshu restores Ifa from his imprisonment in a palm tree, casts him as the founder of the Ifa religion.

The most emblematic and personalized accessory of a Yoruba diviner (babalawo) is his apo Ifa, a beaded leather bag featuring brilliant adornment that is not merely decorative but constitutes a commentary on his vocation through its materials and color scheme. Dedicated to the perpetual pursuit of knowledge, diviners lead a peripatetic existence, making themselves available as advisers and seeking out renowned colleagues whose wisdom and talent might expand their own understanding.

In view of their itinerant way of life, Yoruba babalawo have been compared to artists and is described as “travelers who are strangers everywhere, at home nowhere.”Their mobility and freedom to practice their profession anywhere are facilitated by a portable set of divining implements, which includes palm nuts (opele Ifa), a tray (opon Ifa), a tapper (iroke Ifa), and a small ivory head symbolic of the god Esu (also called Elegba). These are carried in the apo Ifa, the outer flap of which may be decorated with cowrie shells or imported European beads. The fundamental importance of the apo diviner’s way of life is indicated by the epithet akapo (“carriers of bags”).

The high status of Ifa diviners in Yoruba society is reflected in the access they have to materials reserved for royalty, such as ivory and beadwork. The primary emblem of Yoruba divine kingship is a beaded crown, which is worn with other beaded accessories, such as slippers and gowns. That such highly valued and expensive materials are also incorporated into the finery associated with diviners is not merely a sign of their elevated rank but an acknowledgment that both kings and diviners are leaders whose authority stems from their relationship to orun, the otherworld. There is a diviner’s aphorism that alludes to their beaded regalia as visible signs of their comparable power: “[I] share things equally with rulers, they wear kings’ crowns and I wear [diviners’] beaded necklaces.”

According to Yoruba color theory, the chromatic scale may be measured in terms of tonal gradations and temperature, and their full range serves as a metaphor for forces within the cosmos. Three primary color groups are each associated with distinct character traits: white (funfun) is associated with cold; red and the related colors pink, orange, and yellow (pupa), with heat; and black and the related colors blue, purple, and green (dudu) are the mediating tones in between.