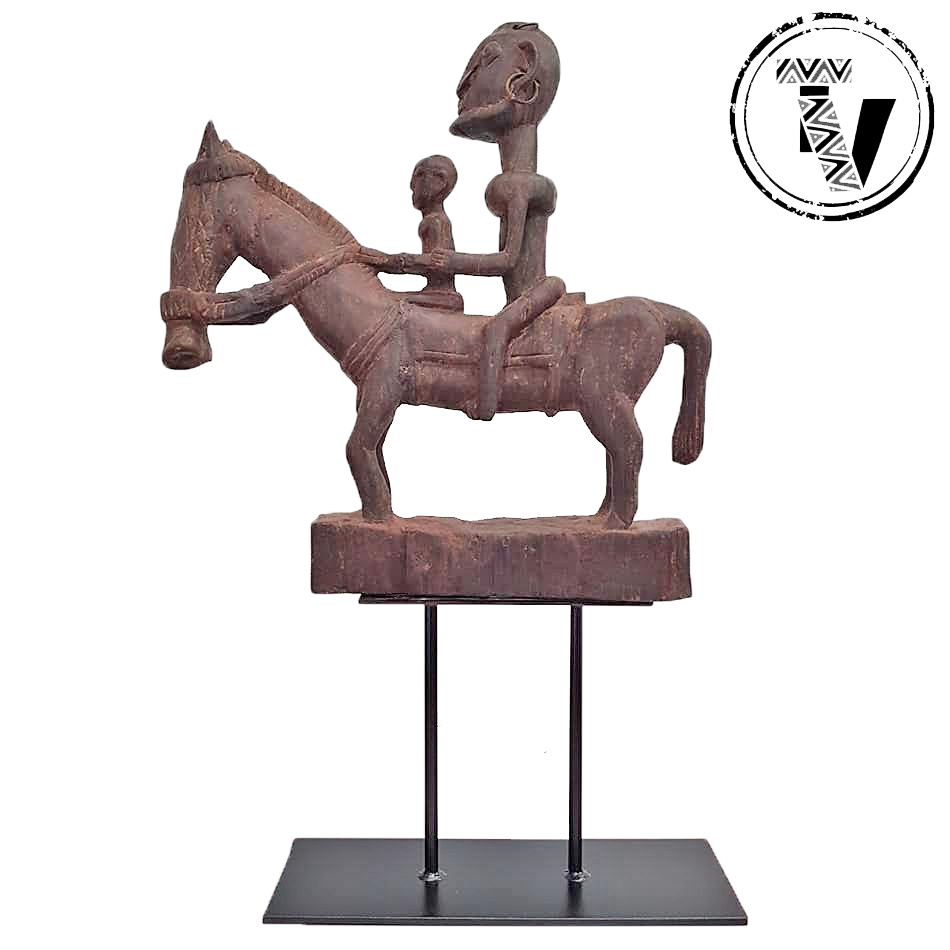 – One of the oldest, most prized, and favorite items in our collection.

It is offered for sale to the serious collector of fine African Art.

Supplied with a custom solid-steel stand.

This hand-carved horse and rider originate from the

One of the most prized and favorite items in our collection.

It is offered for sale to the serious collector of fine African Art.

its roots in a very ancient culture associated with a much deeper ancient historical meaning.

which dominates the plains for over 150 miles.

They speak approximately 120 dialects, many of which are not mutually comprehensible.

At first hunters, now on their small fields, they cultivate millet, sorghum, wheat, and onion.

The millet is stored in high quadrangular granaries around which they build their houses.

Because of the difficult approach to these regions and the aridity of the climate,

religious habits and ways of making the necessary implements, their carvings.

In the Dogon pantheon, Amma appears as the original creator of all the forces of the universe

and of his descendant Lebe, the god of plant rebirth. The first Dogon primordial ancestors,

called Nommo, were bisexual water gods. They were created in heaven by the creator

god Amma and descended from heaven to earth in an ark.

The Nommo founded the eight Dogon lineages and introduced weaving,

smithing, and agriculture to their human descendants.

In Dogon beliefs, the horse and rider figures are seen as a mythological symbol of the seventh Nommo.

According to Dogon history the Nommo, of which there are eight, are the forefathers of the entire Dogon race.

After the sacrifice of the fifth Nommo and the scattering of his dismembered body across the earth,

the seventh Nommo descended from the heavens.

This was the blacksmith, who brought to earth the ancestors of human beings, animals, grains, and technology.

Upon landing the rider, the seventh Nommo disembarked from the ark on horseback.

It is believed that the horse was the very first animal to inhabit the earth.

Hence the horse motif is found throughout Dogon art.

Horsemen are remainders of the fact that, according to myth, the horse was the first animal present on earth.

The Dogon style has evolved into a kind of cubism: ovoid head, squared shoulders, tapered extremities,

Dogon sculptures serve as a physical medium in initiations and as an explanation of the world.

They serve to transmit an understanding to the initiated,

who will decipher the statue according to the level of their knowledge.

Carved animal figures, such as dogs and ostriches, are placed on the village

stools and house posts are also adorned with figures and symbols.

Be the first to review “Dogon Horse and Rider” Cancel reply